There's nothing in the world like a fresh, large, Guatemalan Mango. No matter where you go in Guatemala, you'll find fresh produce and fruit markets on just about every city block. Guatemalans from the rural communities will travel to Guatemala City and other bigger cities to sell their freshly harvested product and fruit. In the United States it seems like it takes several weeks for produce to make it to the grocery stores and by then it's been sitting in boxes and coolers. Nothing compares to eating it fresh! 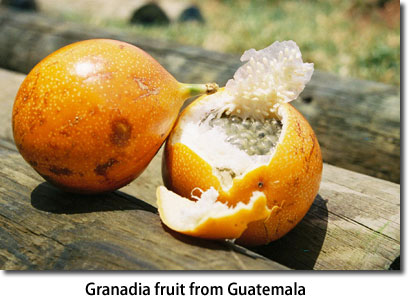 The nice thing about Guatemala is that no matter where you are in the country, you're going to find a fresh produce stand. The other nice thing is that it's so cheap!

Probably the most fun Guatemalan fruit to eat, in my opinion, is the granadia. It looks like a yellow egg with a stem and has a semi-hard shell that you have to tear into. Once inside, the fruit resembles a brain. Hundreds of black seeds engrossed in a sweet mucus-like substance give the fruit its flavor. Personally, I think it's absolutely delicious and I could eat 8-10 at a time. Because of the mucus-like substance, locals have told me they nickname it "booger fruit" or in Spanish, "fruta de mocos". Sick name, tasty fruit!